It’s an unexpected but very welcome perk of the job.  I’ve been lucky enough to meet some lovely people through #LincsConnect and the past few days is no exception.

I’ll be writing in more detail over the next few days about each of my meetings but first let me state quite categorically that feeding me at a meeting isn’t a requirement…. but I am, of course, always very appreciative and it would be rude to say ‘no’ wouldn’t it?

I was invited by Kathryn of Cocoa Encounters to visit the Louth Chocolate Tasters meeting on Monday evening.  Well, would you turn down an invitation like that? Probably not – so neither did I…

I’m not giving too much away but this is all that was left at the end of the evening: 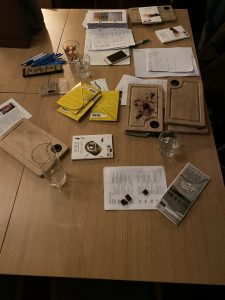 Sorry, that’s probably another silly question.  However, it was a very pleasant surprise and totally unexpected.  A 10.00am meeting at Police HQ today (actually, it was about 10.15am because yours truly managed to take a wrong turning) with Assistant Chief Constable Kerrin Wilson. Despite being a little late (a detail that was graciously overlooked) I was treated to a slice or two of orange drizzle cake to go with my cup of coffee. Thank you Kerrin, you’re very kind.

I’m looking forward to seeing what #LincsConnect can do to help @lincspolice in the not-too-distant future and I have to say, if Kerrin’s enthusiasm is anything to go by we can look forward to some quality updates very soon.  Why not give @Kerrinwilson999 a follow on Twitter and don’t forget to say “Martin from @LincsConnect sent me”  I’m afraid it may not get you a slice of orange drizzle cake though but it’s the thought that counts isn’t it?

At the very least, I can offer you a picture of the cake.  You’ll thank me for it later when it doesn’t affect your waist line.

Looking forward, I’ll be writing more in depth blogs about the Louth Chocolate Tasters as well as my meeting with Kerrin.  There is also a blog to look forward to about the ‘Book Fest’ which is being organised by Rabbit Hole Brigg and Pink Pig Farm which I think is going to be a huge success and an annual fixture in the Scunthorpe calendars.

That’s it for now folks. Take care of yourself and don’t forget to take care of others too.  The #LincsConnect hashtag is here for you to use on Twitter, Facebook and Instagram so be sure to visit it to see what’s going on.