I hope you all agree with me that the Twitter based networking session on Monday was a really good event?  I hope you found it useful as an alternative to a face to face meeting and will join in again.  The travel and social distancing restrictions have obviously taken their toll on many events but with safety in mind I think this made a good alternative.  However, as it was my idea I’m sure you’ll forgive me for being a little biased.  That said, I would really like to hear your feedback from Monday please.  Perhaps you would be good enough to leave a comment at the end of this blog for all to see or if you prefer, you can email me at martin@lincsconnect.co.uk

In the past I have organised monthly networking sessions on Friday evenings.  My thinking behind a Friday evening meeting is that many people are glad to finish work on Friday afternoon so a relaxed meeting in the bar at The Petwood Hotel seemed like a good idea.  Unfortunately (due to illness) I stopped the meetings but they never re-started.  Perhaps that is a priority for the future?  In the mean time I’m considering continuing with the Twitter meetings for a while with a view to perhaps moving it onto a different platform in the future to make it more inclusive for those who don’t use twitter.  Again, I would like to know your thoughts on that idea.  Looking to the future, I’ll be organising some ‘NetWalking’ events where, you guessed it, we’ll be networking while walking.  I’ve already organised insurance for that so keep a look out for updates.

I don’t want to fall into the trap of doing a weekly session as that often results in the same group of people talking roughly about the same things each week. As a networking idea I don’t think it’ll be of much value to members.  Perhaps fortnightly or monthly?  What do you think?  Again, I’m open to suggestions.  I am conscious too though that I have to fit this in around my ‘paid work’ when travel restrictions are lifted.  With that in mind, I’m drawn back to a Friday early evening session or perhaps one Friday morning each month. Tuesdays are also an option at the moment too. Any feedback will again be appreciated.

As with any other networking group it’s important to keep the meetings fresh and interesting.  Having a guest speaker wouldn’t be practical but having a guest subject might be much more interesting and more beneficial to the group as well.  My idea is for a member to pose some questions and email them to me so that I can organise the meeting around the chosen subject.  Here is an example:  One of my businesses is @MandarinMothers where I provide antenatal and postnatal treatments, exercise programmes and partner focused massage classes.  In that capacity I would email my questions to the organiser (LincsConnect) to be organised into a structured Twitter meeting.  As the therapist I would be able to join in fully with the meeting in the knowledge that the admin is being taken care of by LincsConnect.  Other examples could be @LincsPolice posting information about Lincolnshire Police to let you know how the police can support you and how you can support the police.  They would be free to answer questions while LincsConnect poses the set questions.  It’ll take some thought but at least you have the idea and will be able to consider how you can use the networking to inform people  and hopefully gain some new clients.

Lots To Think About

In summary, I’m considering either a monthly or fortnightly session on Tuesdays or Fridays either in the evening or in the morning. Possibly moving (eventually) to a more inclusive platform and having a guest subject.  Don’t forget that you can leave a comment with the blog and/or email me at martin@lincsconnect.co.uk

The plan was to ask everyone to sign in then while you were doing that I was sorting you into groups of 4 or 5.  Once in your groups I sent each group some simple instructions on a blackboard.  They included:  In turn, tell the group your name, your company/organisation and your position in the organisation.  Doing it one at a time should have stopped everyone tweeting at the same time and causing confusion.  Oh, and ‘use the #LincsConnect hashtag on every tweet’.  How did it work for you?  If you found it confusing at first, did you soon get the hang of it? 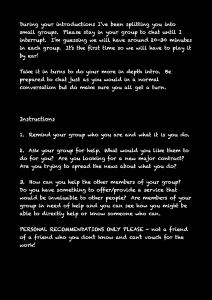 Did you all understand the importance of the hashtag?  Without the hashtag on your tweet we can’t look back to see what was said.  Without that information some of your fellow members who might need to check back for future reference won’t be able to find your tweet.  Did you know that al of the tweets with the #hashtag #LincsConnect on are still there and ready to be viewed if you want to?  That means you will be able to look back and see someone who was there on the night who you didn’t get to chat to.

That’s about it for now.  I propose the next Twitter Networking session should be on Friday 24 April.  How does that sound?